We consider a game-theoretic, von Neumann model of the transitional process from an initial stationary state to a more abundant stationary state, with matrix A of inputs and matrix B of outputs containing explanatory functional variables.

This treatment demonstrates the principles and laws of Functional Macroeconomic Dynamics.  The reader must ”go to your sources” for details, many of which will not be parroted here.  Pencil-to-paper study of both models will generate understanding of the immanent intelligibility of the dynamic economic process. The explanatory functional flows will be purely relative to one another, purely functional, purely dynamic, and, by shortened intervals, supply-demand concomitant.  The theory of Functional Macroeconomic Dynamics is an explanatory field theory comprised totally of endogenous interdependencies; the theory is prior to, and more fundamental than, a theory based on a psychology of utility and preference.

The key ideas and conclusions of this section may be stated here and now:

(The task of the macroeconomist) is to work out the correlations that exist between the velocity and accelerator rhythms of production and the corresponding rhythms of income and expenditure.  The set of such correlations constitutes the mechanical structure, a pattern of laws that stand to economic activity as the laws of mechanics to buildings and machines. [CWL 21, 43]

The characteristic equation of the inputs and outputs of the models is an implicit equation; it demonstrates a) that the concrete process is explained by the relations of the abstract primary relativities of constituent functionings among themselves, applied to secondary concrete determinations of the actual prices, quantities, and technology of a non-systematic manifold, and b) that the primary relativities are expressed as implicit equations constituting the implicit definitions of interdependent functional flows by the functional relations in which they stand with one another.

We first refer to Burley’s introductory simplified two-by-two input and output matrices in the format of linear algebra. [Burley 1992-2, 275]  We ask the reader to visit [Burley 1992-2] for the contents and the context of the symbols and for better renditions of the matrices.

Note that the characteristic equation is an implicit equation and the terms implicitly define and mutually condition one another.  The variables must be assigned magnitudes, but the magnitudes will be consistent with one another within the constraints implicit in the primary relativity.  The analysis is purely relative. Terms are defined by the relations in which they stand with one another.  In order for this characteristic equation, representing aggregates of activities, to equal zero, any variation in one term requires a compensating change in another term.  The terms are mutually defining, mutually conditioning, mutually supporting, and mutually constraining.

Note also that the strategy intensities are mutually conditioning and mutually constraining. An excess of one intensity implies waste in its output and insufficiency in another output.  There are systematic constraints.

This general formalism may be expanded to larger matrices so as to include more detail, but the general form continues to be generally applicable and universally relevant; it is grounded in the fully explanatory relations of quantities among themselves; it is purely relative and does not change with changes in the secondary determinations of the scaling factors: labor supply L, money supply Y, and technology multiplier k; it is an abstract primary relativity which may be applied to these secondary determinations in any instance. The mathematical meaning of Burley’s pattern is general; it can accommodate any substitutions of labor supply, money supply, or productivity multiplier.

Next we show Burley’s slightly more complicated characteristic equation for three-by-three inputs and outputs and the Newton-Raphson root solution for this three-by-three transitional expansionary process. [Burley, 1992, 277]

from which the strategies for relative intensity and relative pricing may be derived.

The point is that, while Burley’s evolutionary model is a very-much simplified linear model, its characteristic equation demonstrates clearly the primary relativity – independent of human psychology; and general and universally relevant in any instance –  axAy = xBy, or xBy– axAy = 0, which can be applied to the secondary determinations of money supply, labor supply, and  technology in the non-systematic manifold.  All the primary-relational terms are interdependent; they implicitly define one another; they mutually condition one another.

By shortening the time interval between inputs and outputs, the inputs and outputs can become practically concomitant, with any slight delays or lags supportable by the temporary credit function. Thus we always deal with the “current process”;  and the growth rate α-1 and interest rate β-1 are purely-current relativities whose maturity is the instantaneous now.

The productive process is, then, the (current) aggregate of activities proceeding from the potentialities of nature and terminating in a standard of living.  Always it is the current process, and so it is distinguished both from the natural resources, which it presupposes, and from the durable effects of past production. [CWL 15, 20]

Regarding concomitance, and with a sidelong glance at the familiar Diagram of Rates of Flow,

A condition of circuit acceleration was seen in section 15 to include the keeping in step of basic outlay, basic income, and basic expenditure, and on the other hand, the keeping in step of surplus outlay, surplus income, and surplus expenditure.  Any of these rates may begin to vary independently of the others, and adjustment of the others may lag.  But any systematic divergence brings automatic correctives to work.  The concomitance of outlay and expenditure follows from the interaction of supply and demand.  The concomitance of income with outlay and expenditure is identical with the adjustment of the rate of saving to the requirements of the productive process. [CWL 15, 144]

Thus the process is not explained, as it is in the DSGE methodology, primarily as a set of discontinuous, fitful shocks and sequential adjustments but rather primarily as a practically-continuous set of current interrelated functional flows, concomitantly interdependent, mutually-defining, mutually-conditioning, mutually supporting, and mutually constraining one another.  In both Lonergan’s Pure Cycle of Gross Domestic Functional Flows and in Burley and Capo’s linear, game-theoretic, matrix  models, the economic process is explained by equations as a current and continuous complex system of implicitly-defined velocitous flows.  Attention is focused on second-order differential equations of acceleration represented by factors of increase α and β.

The root-solution Macroeconomic Interest Rate is not the Federal Reserve Bank’s or DSGE’s magical external lever; and both the interest rate at the heart of the IS-LM model and the pricing at the heart of the AD-AS model  are to be understood, not as momentary external givens, but rather in the light of these significant explanatory flows.

Lonergan agreed with Schumpeter on the importance of systematic or analytic framework in order to explain, rather than merely record or describe, the aggregate phenomena of macroeconomics; … and he agreed that the economist had to know what are the significant variables in the light of which price changes are to be interpreted. According to Lonergan, standard economic theory had successfully achieved none of these desiderata. [CWL 15, Editors’ Introduction liii]

In a theoretically stable economy, merely reproducing itself in a constant velocity period after period, the velocities of flows would be indicated by α = β= 1.  Thus McShane understands and insists that the creative key context in the macroeconomics of a creatively expanding economy is the shift of focus to differential equations representing accelerative growth.

Taking into account past and (expected) future values does not constitute the creative key transition to Functional Macroeconomic Dynamics.  Those familiar with elementary statics and dynamics will appreciate the shift in thinking involved in passing from (static) equilibrium analysis … to an analysis where attention is focused on second-order differential equations, on d2θ/dt2, d2x/dt2, d2y/dt2, on the primary relativities of a range of related forces, central, friction, whatever.  Particular secondary boundary conditions in Functional Macroeconomic Dynamics, past and future pricings and quantities, are relatively insignificant for the analysis of the primary relativity immanent in, and applicable to, every instance of the process.  What is significant is the Leibnitz-Newtonian shift of context. [partial paraphrase of McShane, 1980, 127]

Finally, we append an extensive Table of Results for Burley’s Transitional Model in the Appendix to (Burley, 1992-2, 279) as follows: [1](Note to self and reader: research erratum of parenthesis in denominator) 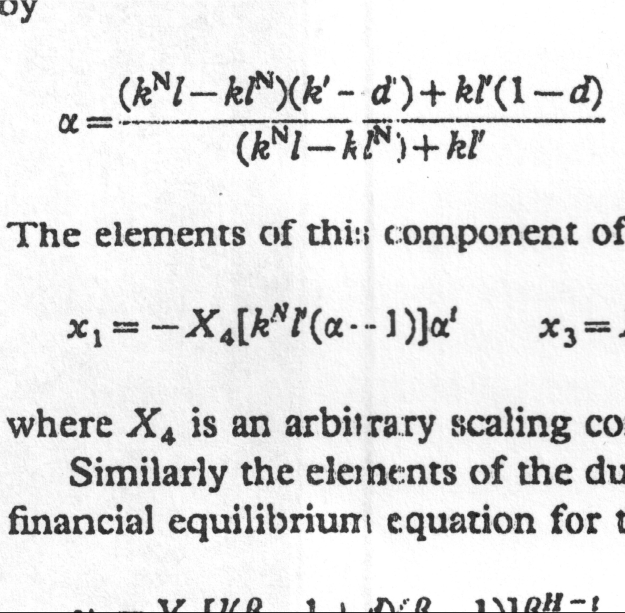